Research on individual fatty acids, the component parts of what we commonly refer to as 'fat', has increased recently and with it our understanding of the necessity to consider the type of 'fat' supplement we offer dairy cows in more detail.

What is becoming clear is that fat supplements cannot simply be considered as a source of energy, but that individual fatty acids can elicit markedly-different production and metabolic responses in dairy cows. Hence the mix of fatty acids in a particular fat supplement is the key factor to consider when evaluating which fat product to add to a dairy diet. The dairy sector has previously transitioned from crude protein to amino acids and it's now time to stop feeding 'fat' and start thinking about these individual fatty acids. Volac Wilmar has recently launched a nutritional platform designed to provide improved guidelines on use of fatty acids in dairy nutrition.

What are fatty acids

The basic structure of a fatty acid is presented in Figure 1, using the example of palmitic acid (C16:0). Fatty acids differ in relation to the length of the carbon (C) chain (ranging from two to over 20 C atoms) and the number of hydrogen (H) atoms surrounding the C atoms which determines whether the fatty acid is saturated (high melting point; solid) or unsaturated (low melting point; liquid).

When we consider commercial fat supplements, palmitic, stearic and oleic are typically the most abundant fatty acids in these fat sources. 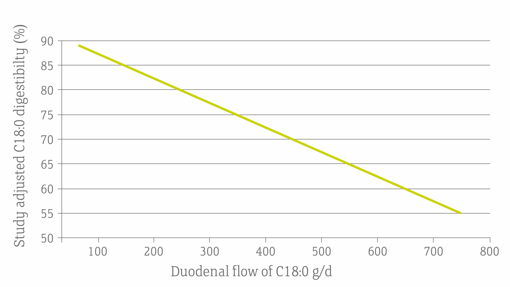 Oleic acid is regarded as an effective amphiphilic agent, promoting formation of the micellar structures essential for digestion of fat in ruminants.

Meta-analyses data from studies with post-peak dairy cows supplemented with 'high-C16:0' supplements (>80% C16:0) were reported by de Souza et al. (2016) at Michigan State University, USA. 'High-C16' products, supplemented at an average 1.8% of diet dry matter, had no significant effect on dry matter intake or milk yield, but increased (P<0.01) milk fat from 3.58% to 3.81% and milk fat yield from 1.49 kg/d to 1.59 kg/d. When these data were subsequently analysed by meta-regression, a significant (P<0.01) positive linear relationship between increasing C16:0 intake and milk fat yield was observed.

The effects of altering the ratio of C16:0, C18:0 and C18:1 fatty acids were evaluated in further work at Michigan State (de Souza et al., 2017). Mid-lactation dairy cows were offered one of four treatments in a Latin square design, with fat supplements added at 1.5% of dry matter: 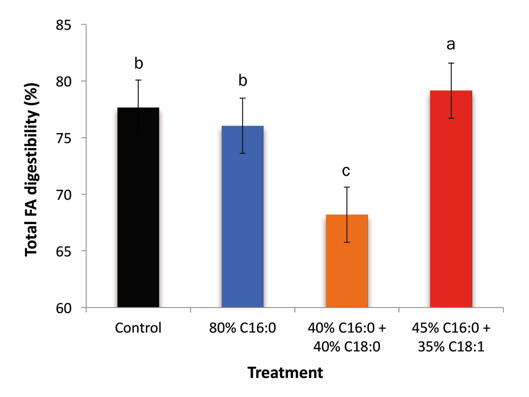 Key production data from this original study are presented in Table 2. All fatty acid supplements had beneficial effects on milk yield (mean increase 1.9 kg/cow/day). However, major differences between treatments were recorded with milk fat production; the high-C16:0 fatty acid supplement increased milk fat components, in line with data reported in the previous meta-analysis. More-novel findings from this study are the effects of the C18:1-containing fatty acid supplement on live weight and body condition score (BCS), with cows offered this supplement recording significant (P<0.05) gains in both these parameters compared to the other treatments. Part of these effects may relate to increased insulin, an antilipolytic hormone, recorded in response to supplementation with C18:1.

These new research data highlight the importance of considering 'fat' supplements on the basis of fatty acids, specifically in relation to the balance of C16:0 and C18:1. Increased C16:0 leads to increased partitioning of energy to milk, primarily through increased milk fat production, whereas C18:1 fatty acids direct energy toward body fat reserves. This enables us to recommend specific adjustments in the C16:0 : C18:1 ratio through lactation to account for production and body condition considerations (Figure 4).

Early lactation cows have a predisposed genetic drive to produce milk, achieved at the expense of body fat loss. In this respect, adding further C16:0 to the diet is likely to exacerbate this natural homeorhetic partitioning of nutrients away from body reserves to milk, with the consequent risk of metabolic diseases. In contrast, the insulin-stimulating effects of C18:1 indicate that this fatty acid is particularly desirable in early lactation to increase partitioning to body fat stores and reduce extent of body condition loss. Improvements in total fat digestibility observed with C18:1 will provide an additional energy boost from the basal ration and realise an improvement in egg quality and early embryo development to improve fertility (Aardema et al., 2011).

Transitioning from fat to fatty acids

The Fat Feeding Platform - transitioning from 'fat' to fatty acids
Volac Wilmar has leveraged its current knowledge and that arising from these new data to launch a nutritional platform to improve the understanding and rationing of the primary fatty acids in dairy diets (Table 3).

However, the majority of diet formulation systems pay little attention to detailed fatty acid nutrition, representing a challenge to nutritionists to implement the findings at a practical on-farm level. Similarly, it raises the bar for developers of nutrition models to devise more-detailed systems to account for the fatty acid balance of basal diets and specific 'fat' supplements.