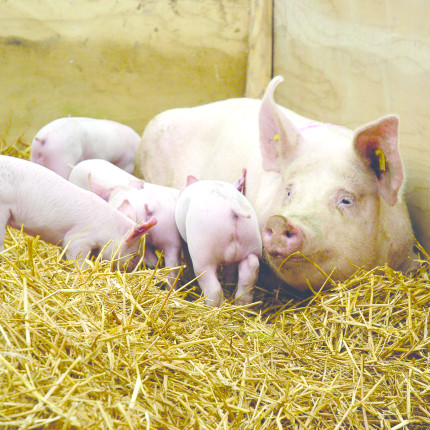 Why add fat to monogastric diets

Fat is an essential nutrient and sufficient amounts must be supplied in the diet to meet animal requirements. However, fat is also a unique nutrient which offers benefits not available from other nutrient sources such as starch, in particular supplying a concentrated source of energy.

Fat has the highest energy of all the nutrients available, containing around 2.5-times the energy concentration of cereals, making fat an excellent ingredient to add to diets where a boost in energy is required.

Fatty acids (the building blocks of fat) may be classified as saturated (SFA) or unsaturated (USFA).

Saturated fatty acids have high melting points and fats with high levels of these fatty acids are in solid, easy-to-handle form (e.g. solid fat supplements including Volac Wilmar’s Mega-Boost, Mega-One and Mega-One Extra). In contrast, fats with high levels of USFA are liquid oil sources which can be difficult to handle and store (e.g. vegetable oils).

However, SFA have lower digestibility than USFA and it is important to consider the balance of these fatty acids in the complete ration to ensure adequate digestibility. Guidelines for formulating finished feeds for pigs and poultry:

Meat quality is strongly influenced by the balance of SFA and USFA in the ration which is determined by the type of fat used in the diet.

Vegetable oils (or fish oils) are commonly added to diets to increase the total fat and energy content of the diet. However, liquid oils can lead to problems with meat quality post-slaughter, as the high levels of ‘soft’ fatty acids increase the risk of soft belly / carcass fat.

Solid fat supplements can increase flexibility in ration formulation to help reduce reliance on liquid vegetable oils. As these are composed of the ‘harder’ (saturated; C16:0 and C18:0) fatty acids, they have the benefit of helping reduce the risk of soft carcass fat.

Volac Wilmar’s Mega-Boost, Mega-One and Mega-One Extra are examples of supplements targeted for this purpose.

Fat can only be used if it is digested by the animal and digestibility varies between both fat- and animal-types. As a guideline, fat digestibility is :

Digestion and conversion of feed to energy produces heat in the animal’s body which contributes to heat stress. However, fat generates considerably less heat than all other energy sources and is often added to diets in hot temperatures as a nutritional method of reducing heat stress.

For this reason we often refer to fat as a ‘cool’ ingredient.

Amount of fat in diets

Traditional ingredients in pig and poultry diets typically have a low fat content. For example, cereals such as wheat and barley typically have 2% or less fat, while maize grains (corn) are slightly higher at around 3.5%.

If adding fat to a ration, it is important to consider the factors affecting performance as described previously. Hence, adding liquid oils may increase digestibility of the fat but can lead to poor meat quality, so the balance between liquid oil sources and solid fat supplements may be a balance between optimising fat digestion and carcass quality.

Volac Wilmar offer three fat supplements suitable for monogastrics in solid, easy-to-handle form. All products are in the more-digestible triglyceride form and include Mega-Boost, Mega-one (contains 6% lecithin as an emulsifier)  and Mega-one Extra (with 16% lecithin) most suited to very young animals or those with weakened digestive systems (e.g. due to poor gut health).