In the USDA’s Foreign Agricultural Service oilseed report released on February 9, high prices seen throughout January were a result of tight vegetable oil supplies and rising soybean prices. According to industry analysts and economists, the escalating Russia-Ukraine crisis has been fuelling crude and edible oil markets, contributing to a surge in Malaysia’s palm oil futures. In an Economic Times article, Sathia Varqa Palm Oil Analytics in Singapore, said February exports have also outpaced production. According to reporting, the Malaysian Palm Oil Association estimated February production up to the 20th had fallen by 1.79%. The industry has struggled to keep up with production partially due to a shortage of labour. In October 2021, the Malaysian government announced it was lifting its migrant worker ban that was introduced as part of COVID-19 restrictions, with 32,000 entrants prioritised for the industry.

Dry weather conditions seen throughout South America in the last two months has had a significant impact on forecasted soybean yields and production. In May 2021, USDA forecasted record production for Argentina, Brazil and Paraguay. As of December 2021, forecasts were decreased by 18 million tonnes: Argentina -9%, Brazil -7%, Paraguay -37%. According to USDA, global trade is down on weaker demand from China and Egypt. From October to December 2021, imports from China were down 13% from the previous year. 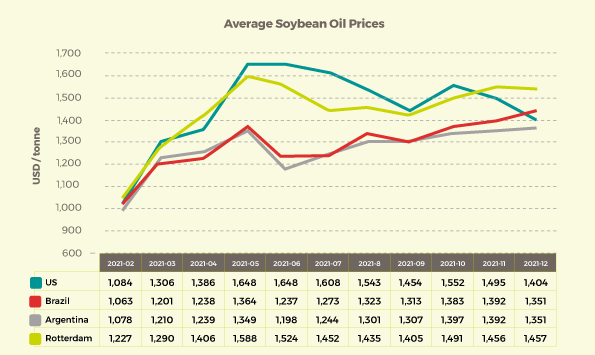 Sime Darby noted concern on Black Sea sunflower supplies as a consequence of the Russia and Ukraine conflict. This could result in a decrease in sunflower oil exports, resulting in further global supply shortages.

FreightWaves reports, “Many buyers of ocean transportation say the carriers have manipulated tight capacity during the pandemic through deferred and cancelled sailings, and other measures, to drive rates up, resulting in record profits estimated to top $200 billion last year. A combination of antitrust immunity, a dozen years of consolidation that has left eight major carriers partnering in three alliances and an expansion into broader logistics services and control of data has enabled the largest carriers to dominate the market.”