As reported in the June 10 Palm Update, Crude Palm Oil (CPO) prices had a volatile start to June as the market reacted to Indonesia lifting its palm export ban on May 23. Despite opening up supply, the market remained strong in the first week of June with reported increased demand from India.

Seeing a high of 6505 RM/tonne ($1,476.06) on June 7, Malaysia’s CPO settlement price started a 14-day nosedive following an announcement from the Indonesian government that the CPO export and levy rate would be lowered from $575 per tonne to $488 per tonne.

According to the Oil Market Report from oil and fat manufacturer Olenex, the price fall was influenced by a heavy stock build-up in Indonesia due to the export ban.

“With the market inverted and the fact that combined export levy and tax in Indonesia is $488 until the end of July and $528 from the 1st of August, sellers are keen to sell/ship out as much oil as possible before the end of July,” says Olenex’s Week #25 report.

Also contributing is a slowdown of vegetable imports from China, says USDA in its latest Oilseeds report, with COVID-19 lockdowns and high vegetable prices reducing demand for palm, soy and rapeseed cooking oils.

“(Marketing Year) MY2021/22 vegetable oil imports are slashed to 2017/18 levels with palm oil imports reduced by 500,000 tons, soybean oil 350,000, and rapeseed oil 150,000 this month. Additionally, sunflowerseed oil imports are cut 500,000 tons as Russia’s invasion of Ukraine has significantly disrupted logistics and shipments of oilseeds and products to global markets. As a result, China's vegetable oil consumption is projected to decline for the first time since the early 2000s. Total food consumption is estimated at 36.1 million tons, down 3 percent from the previous marketing year,” reports USDA.

A strong demand versus supply balance has led to a US soybean oil premiums approaching $150/tonne. According to USDA, the US market is projected to consume 93 percent of all soybean oil produced this year. Brazil is expected to consume 80 percent of its domestic supply while Argentina is expected to only consume 13 percent. US demand is being driven by industrial uses, including biodiesel. 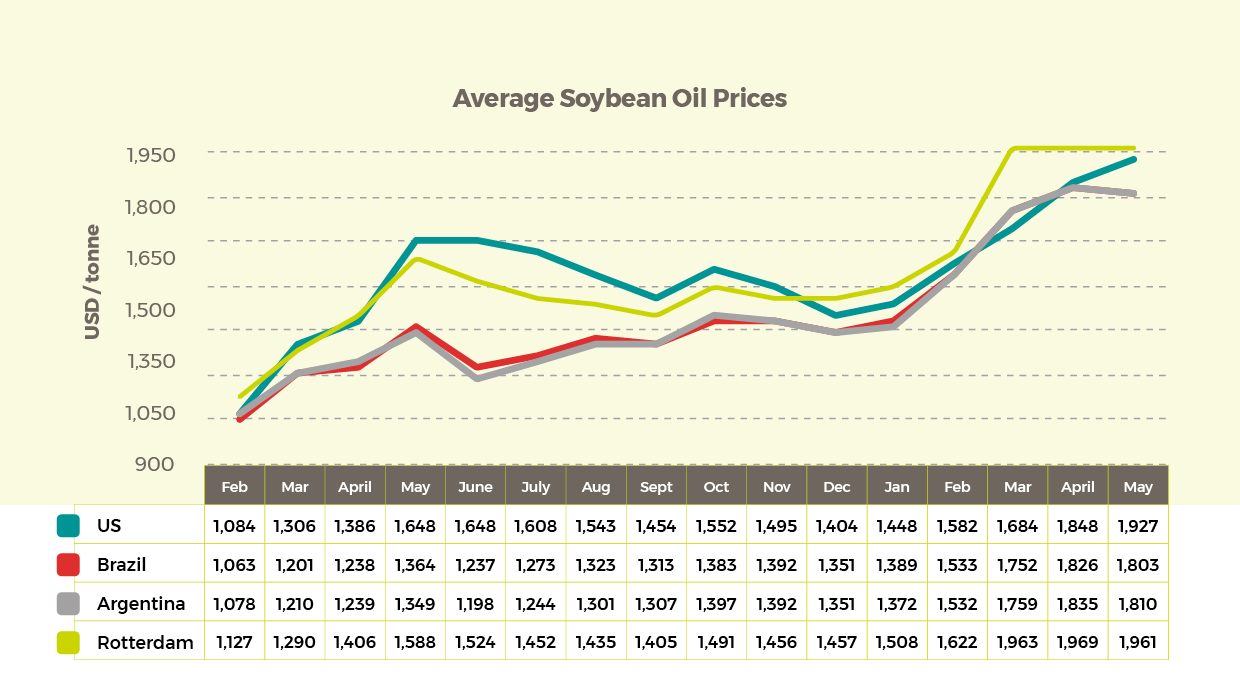 According to maritime data analysis company Sea-Intelligence, the global schedule reliability is similar to 2021, with an average of 36.4 percent in May 2022.

“Additionally, the average delay for late vessel arrivals was reduced once again, this time by 0.37 days to 6.17 days in May 2022. The delay figure is now firmly below the seven-day mark, but it is still the highest in each month when compared historically, although with the margin decreasing sharply,” reports Container News.

“Following on the heels of a record 30.1% hike in May, this now means rates stand 169.8 percent higher than this time last year, with just two months of declines in the last 18 months. Despite a degree of macro-economic uncertainty clouding the horizon, all major trades saw prices moving up, with some corridors showing significant gains,” reports Hellenic Shipping News on the recent Xeneta Shipping Index Public Indices.

In the meantime, Xeneta is projecting rates to continue upwards. However, its analysis argues that the “relationship between their community, shippers and, to some extent, other key society stakeholders has been damaged by disruption, poor quality services (in terms of reliability) and runaway rates increases.”