Uncertainty in oilseed and product exports disrupts the market
Drought conditions in South America have decreased soybean production by nearly 2% in Brazil, Argentina, Paraguay and Uruguay, says USDA’s Foreign Agricultural Service oilseed report released on March 9. With this adding pressure to the global oilseed market, port and crush processing facilities suspending operations in Ukraine and sanctions on Russia have caused further upset. According to the USDA, Russia, and Ukraine collectively account for 80% of global sunflower meal and sunflower oil trade, 20% of rapeseed exports and 15% of rapeseed
oil exports. In USDA’s short-term impact analysis, seed exports are down 57 percent, oil exports are down 14 percent, and meal exports are down 13 percent. “As a result, Ukraine sunflower seed ending stocks are up nearly seven-fold this month to 1.9 million tons. Similarly, domestic consumption (feed and waste) has more than tripled this month on an increase in damaged and spoiled product as well as increased full-fat feeding while meal production is halted,” USDA reports. “In Russia, export reductions are more muted with exporters facing uncertainties in Black Sea shipping routes and the impacts of sanctions. Russia exports are down 33 percent for sunflower seed, 4 percent for sunflower seed oil, and 3 percent for sunflower seed meal.” Russia and Ukraine only account for 9% of global vegetable oil consumption. However, this still has had a knock-on effect on the palm market. According to an analysis by S&P Global, Malaysian palm orders surged from Indian buyers due to uncertainty in sunflower oil shipments out of Ukraine. “Ukraine accounts for 46% of the world’s sunflower oil exports and the ongoing war represents a significant disruption to the global edible oils trade flows as the market was looking for an increase in sunflower oil exports from Ukraine to partially relieve the current tight supply in global edible oil markets,” S&P Global reported.

Soybean prices continue to increase as forecasted production in South America decreases due to persistent drought conditions. Soybeans, meal and oil have also been impacted by uncertainty in the sunflower seed market. According to USDA, “the May contract on the Chicago Board of Trade has risen 38 percent since early December, or nearly $4.70/bushel, to $17.07 on March 8. The November contract for new-crop soybeans has risen at a more modest pace (21 percent), adding nearly $2.60/bushel to the contract price since early December. This has led to a widening premium for old-crop soybeans versus new-crop in the United States. Premiums that were near 2 percent in November 2021 are currently 15 percent in early March.” This has resulted in the selling of stocks rather than holding them into the next harvest this Autumn. 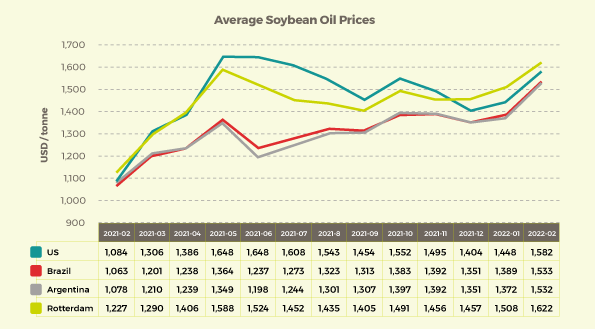 Ship fuel spikes to historic $1,000/ton mark as war fallout worsens
On March 4, American Shipper reported that fuel prices for ocean freight liners had surpassed $1,000/ton. In compliance with IMO 2020 environmental regulations, ships are required to use very low sulphur fuel oil (VLSFO) which is more expensive with a 0.5% sulphur content. “The average price of VLSFO at the world’s top 20 bunker (marine fuel) ports reached $987 per ton on Tuesday, up 84% year on year. In two of the top four ports — Singapore and Fujairah, United Arab Emirates — the price of VLSFO reached $1,001 and $1,024 per ton, respectively. These price levels are unprecedented,” wrote American Shipper Senior Editor Greg Miller.

Covid curb bite at Chinese ports, threatening global supply chains
An outbreak of COVID-19 infections in China is leading to congestion in Chinese ports due to labour shortages. As reported by Reuters, “Container loading is ‘decreasing massively’ at Shenzhen’s Yantian port, the world’s fourth-largest container terminal, as port workers, truckers and factory workers stayed at home.” As of March 16, there were 34 vessels at Shenzhen and 30 vessels at Qingdao waiting to dock. A year ago, there were seven in waiting at each respective port. “This implies that it will become difficult to get cargo to and from the ports and hence whether the terminals are open or not becomes a moot point,” said Lars Jensen, CEO at Vespucci Maritime, a container shipping advisor. “It will have a disruptive impact on the supply chain - in turn prolonging the current supply chain crisis.”