After seeing relief in prices throughout September as Indonesia grappled with growing stocks due to its export policy adjustments, the average daily October CPO settlement price sat 191 RM/tonne ($40.33) higher as markets regained footing.

According to the Week #42 Oil Market Report released by Olenex, price increases were influenced by the uncertainty of sunflower oil and grain shipments from Ukraine and reported sharp drops in soybean oil stocks. 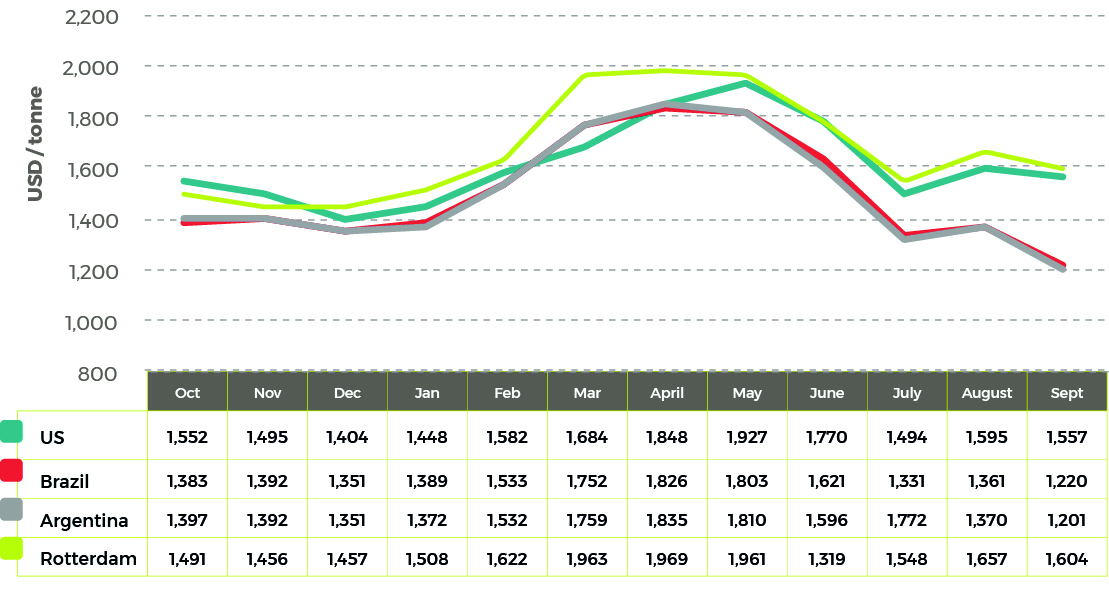 “Even as vessels continue to queue outside East Coast ports, freight rates between China-US East Coast are declining, with freight rates for 40’ containers on the China-New York trade corridor dropping to a rate of US$5,550, which is still higher than the peak season rate pre-pandemic,” reports Container News.

Along with a drop in shipment orders as consumer demand slows, Shifl notes the price movement is also being impacted by International Longshore and Warehouse Union contract negotiation with the Pacific Maritime Association.

“The fall in freight rates can also be explained by a ‘shift’ in peak shipping season over this year, reflected in extremely strong import TEU volumes over the second quarter, pointed out Shifl in its report,” says Container News.

Beginning in August, shipping giant Maersk began to see declines in rates and volumes, months ahead of the company’s original projections that the market would not peak until the fourth quarter of this year.

Reported by Hellenic Shipping News, Maersk saw record high profits in Q3 with a net income of $8.9 billion. However, rates are expected to normalize and lead the company out of record earning territory.

Next year’s contract rates to ‘slide’

Expected contract rates have also slid. In August, Maersk expected average contract rates to increase $1,900 per FEU in full-year 2022 versus 2021, reports Hellenic Shipping News. However, it has since reduced these projections to $1,700 per FEU.”