After seeing a lift from global soybean markets in August, Malaysia’s Crude Palm Oil (CPO) settlement prices have had a volatile September, hitting a 19-month low of 3,226 RM/tonne ($695.93) on September 28. The last time CPO settlement prices were at that level was February 3, 2021.

According to industry reporting, the rebound in price was due to tracking related oil markets.

After seeing steady losses since May, global soybean oil prices rebounded in August. According to the USDA’s September Oilseed Report, this rally was driven by an increase in biodiesel production, which supported US prices, and a reduction in soybean crush exports from Argentina. 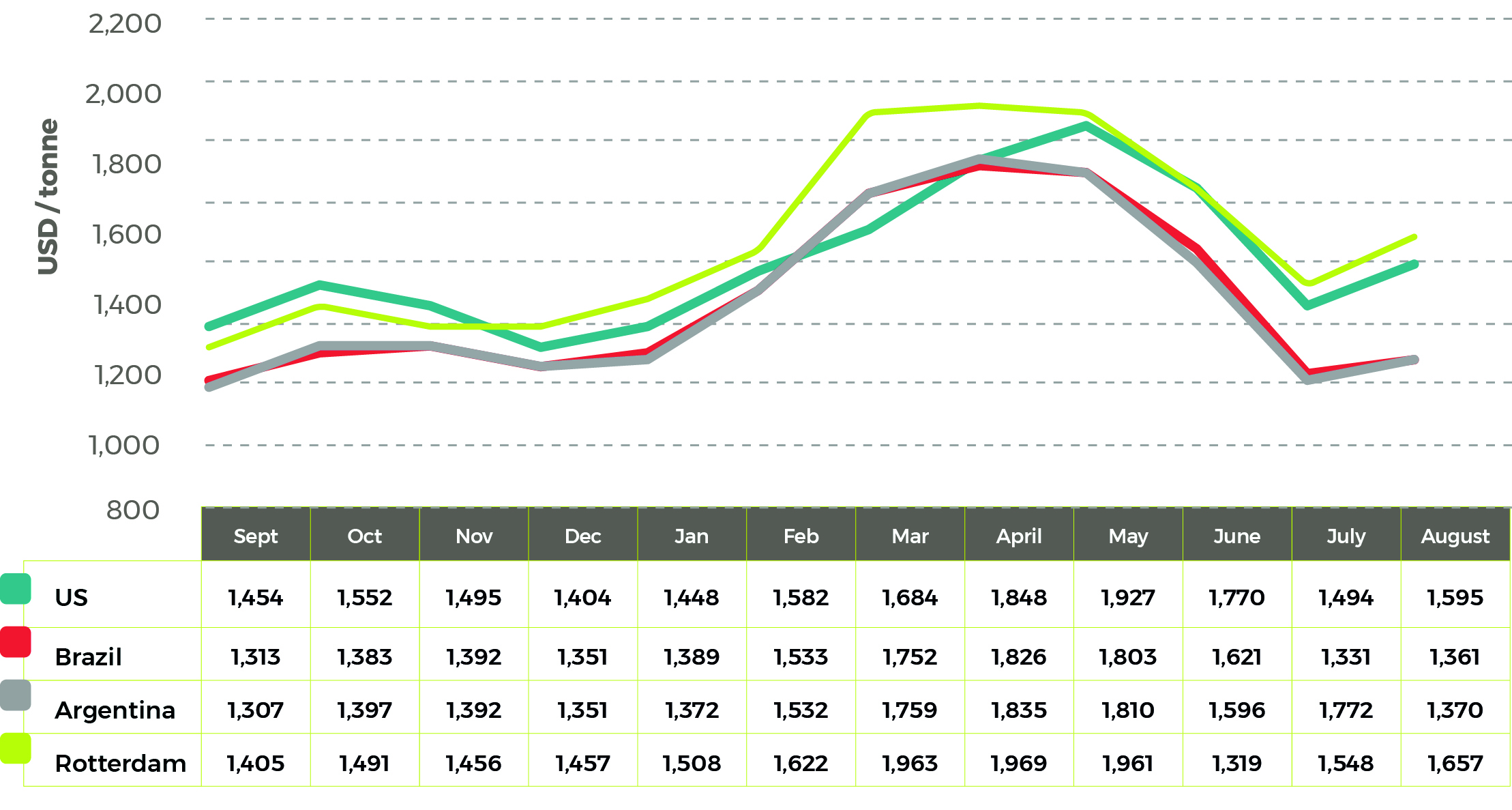 For the fourth week in a row, container spot rates have fallen by 10 percent – marking a 58 percent decrease since January, shows data from Drewry World Container Index.

In reporting by Seatime Maritime New, “lines have responded by aggressively pulling capacity from major trades ahead of the Golden Week in China, but still rates continue to fall. According to Xeneta capacity on the trade between Asia and the US West Coast is 13% lower than it was in the same period in 2021 – the equivalent of 21 ships of 8,000 teu – the average vessel size on the trade.”

The Maritime Executive reports this downward trend is starting an expected market normalization after more than two years of surging shipping prices.

“After numerous reports citing declines in container spot rates, the first data showing declines in long-term contract rates are beginning to align with fears of a broadening global recession. Leading industry executives had predicted a normalization of the markets in the later part of 2022, which is being confirmed in the latest reports,” reports The Maritime Executive.

With the end of the year rapidly approaching, Drewry maritime research and consulting agency has released advice for international shippers to improve 2023 ocean bids.

1. Should we move away from fixed rates and switch to the spot market

Short answer: “Drewry’s advice in most cases is that shipping is not just about cost and it is better to go to existing providers to request a reduction in contract rates than to damage existing business relationships and service levels.”

2. Should we expect lower contract rates in 2023 and go to bid later?

Short answer: “Yes and yes – the later you go to bid, the lower the contract rates are expected to be, based on unique forecasts from the Drewry Container Forecaster research.”

3. How do we bring back more favourable terms to our shipper-carrier contracts?

Short answer: “…with the market moving to over-capacity, the pendulum will swing again and shippers can review their contract and request more free time (within reason), longer payment terms and higher service level commitments from carriers, for example.”

4. Should we drop the providers who treated our company badly during the under-capacity crisis?

Short answer: “Our view on these questions is that for most companies seeking reliable logistics and long-term improvements in operations, the continuity of business relationships remains critical and tolerating cyclical market stresses is necessary.”