*Reported by The Edge Markets

Palm recovers off the back of global soybean markets

Growing conditions for soybeans in the US became worrisome as the Midwest region of the country experienced prolonged heat and drought conditions during the peak of its growing season, causing concern about harvest yield later this year.

As the soybean market reacted to these and other pressures, CPO markets also received an increase. A close substitute for food and fuel, palm oil prices are greatly influenced by soybean oil prices.

On August 12, USDA released its August Crop Production report, projecting the US to have a record 51.9 bushels per acre in 2022, for a total yield of 4.53 billion bushels (123.3 million tonnes).

As Brazil heads into its planting season, it is expected to have a record 2022/2023 harvest of 271.4 million tonnes of soybeans.

During the writing of this report on August 30, the expected increase of supply to the market was being credited for a market drop that saw soybeans down $0.14-$0.20 on the Chicago Board of Trade. 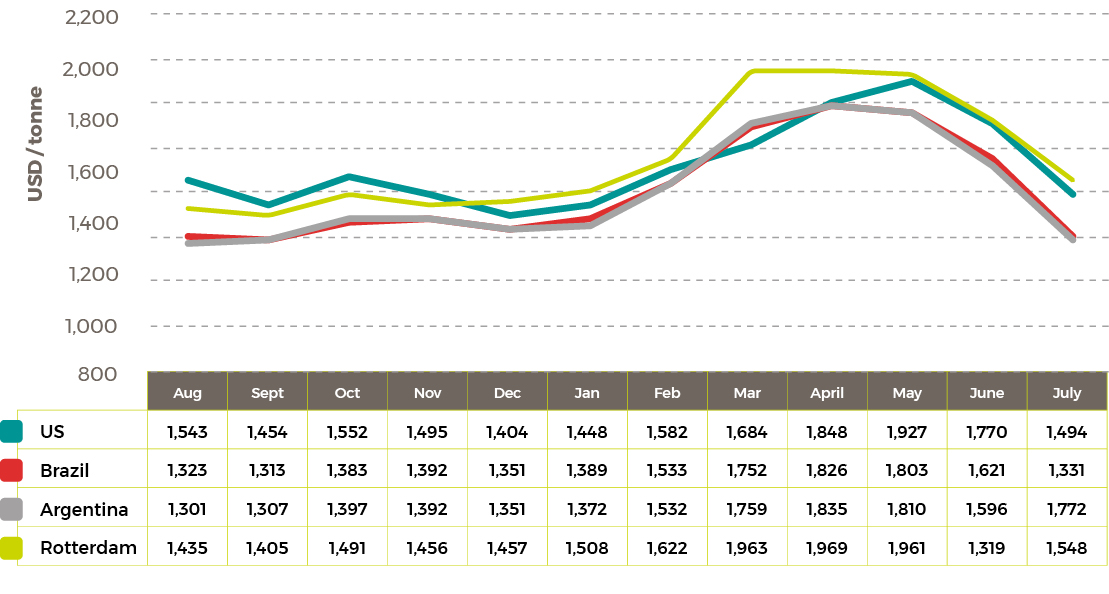 As prices from Asia to the US across the Pacific continue to go down, prices per forty-foot equivalent unit (FEU) across the Atlantic from Europe continue to hold strong.

“The East Coast port congestion that’s tying up ships coming from Asia via the Panama Canal is simultaneously soaking up capacity arriving from Europe. Trans-Atlantic vessel capacity is much more limited than in the trans-Pacific, with the balance remaining in favor of shipping lines — even more so due to congestion. Consequently, trans-Atlantic spot rates remain historically strong, bucking the global trend,” reports FreightWaves.

As reported on August 18 by maritime analyst Drewry:

“According to the indexes, it’s now more expensive to move spot cargo westbound across the Atlantic from Europe to the East Coast than it is to move cargo eastbound across the Pacific from Asia to the West Coast — even though the sailing distance across the Pacific is almost twice as long (meaning that carriers are now earning dramatically more per FEU-mile in the trans-Atlantic than the trans-Pacific),” reports FreightWaves.

After seeing an all-time low reliability rate of 30.4 percent in January 2022, global container reliability has risen to 40 percent.

Figures from the Sea-Intelligence Global Liner Performance report show reliability is still far behind pre-pandemic figures when reliability saw a high of 83.5 percent in June 2019.

“As noted in its recent second quarter results, Maersk was the most reliable of the container lines with schedule reliability at 49.5%, followed by Hamburg Süd at 41.4% and ten carriers in the 30%-40% range. Yan Ming and Wan Hai both trailed at 24.8% and 29.2%, respectively,” reports Seatrade Maritime News.