The effects of heat stress on animal performance are well-documented, with some of the main effects as follows :

Research studies with dairy cows have reported reductions in DM intake at ambient temperatures above 25°C, with feed intakes at 40°C typically reduced by 20 to 40% compared to cows in a thermoneutral environment. As a consequence, cows under heat stress are generally in a state of negative energy balance.

The reduction in DM intake, coupled with increased energy demands for maintenance (see later), contribute to the negative effects on milk output recorded with cows under heat stress; studies have reported a reduction in milk yield of 25 to 35% where heat stress conditions have been evaluated. 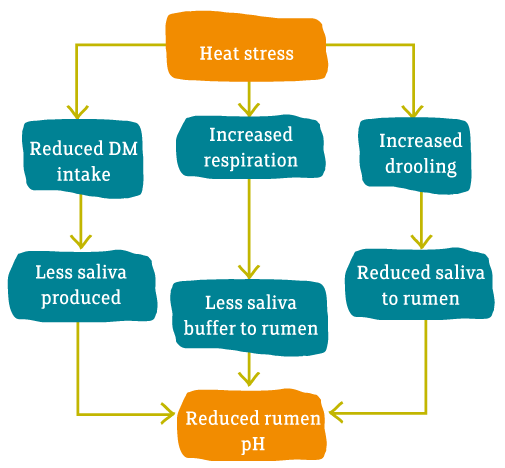 Heat-stressed cows can have significantly reduced reproductive performance, with studies reporting conception rates of less than 10% during hot months of the year, compared to 40 to 50% in cool weather. The major consequence of heat stress on reproduction is a delay in re-breeding of cows after calving, resulting from, inter alia, a decrease in the number of cycling cows detected in oestrous and a decrease in the number of inseminated cows that establish and maintain a pregnancy.

Problems associated with heat stress are exacerbated in high producing animals – these animals have greater metabolic activity and produce more body heat than low producers and  hence are more susceptible to heat stress.