Megalac provides an increased energy supply which can be efficiently converted to milk and has been proven to increase milk production in many research studies over the last 30 years.

A study undertaken at the Dairy Research Facility of the Tasmanian Institute of Agriculture (a joint venture between the University of Tasmania and the Tasmanian Government) evaluated the effect of long-term (through a 200-d lactation period) supplementation with Megalac on performance of dairy cows on a grass-based system.

All cows were grazed together as a single group and received 4 kg concentrate/head/d, offered as two equal feeds in the parlour during AM and PM milkings, throughout the 200-d of the study. Cows in the Megalac group were offered the additional 250 g Megalac supplement in addition to the 4 kg/d of standard concentrate offered (total 4.25 kg/d). All cows were treated similarly from calving to start of the study at 20 DIM, and from 220 DIM until the end of lactation (dried off at 293 DIM).

Results from the study are presented in Table 1. Cows offered the Megalac supplement produced an average 1.3 kg additional milk/d across the 200-d supplementation period - this represents a 6% increase in average daily milk production.

As presented in Figure 1, cows offered the Megalac supplement produced more milk at all stages throughout the 200-d feeding period, indicating that cows responded to the additional energy supply from the fat supplement even through late lactation. Peak response to supplementation was recorded between 110-120 d of lactation when Megalac-supplemented cows produced an additional 2.1 kg milk/d compared to cows offered the control ration.

The graph also shows that cows which had been offered Megalac continued to produce more milk for a further 30 d after Megalac supplementation ended - this residual response averaged +0.8 kg milk/cow/d. 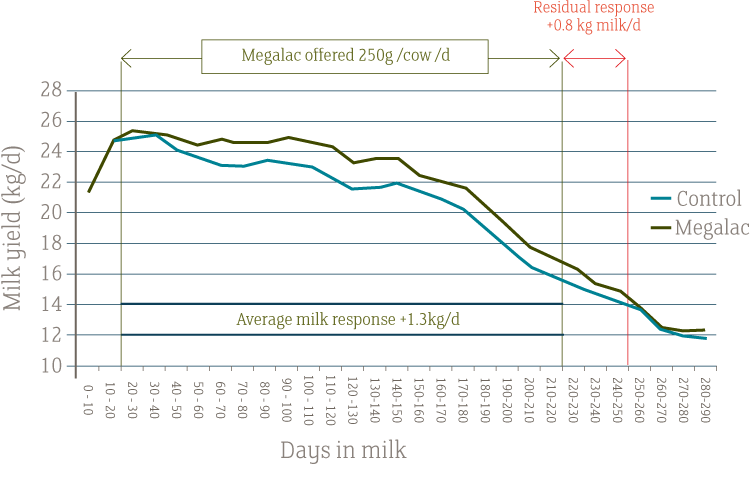 Fertility levels were high in all cows, with conception rate to first service from 68-70% and final pregnancy rate at over 90%.

Freeman, M.J. and Kirkland, R.M. 2015. The effect of supplementation with a rumen-protected fat (Megalac) through an extended period of lactation on milk production of dairy cows in a pasture-based dairy system in Tasmania. British Society of Animal Science, Annual Conference, p190.

Freeman, M.J. and Kirkland, R.M. 2015. The effect of supplementation with a rumen-protected fat (Megalac) on fertility and blood metabolite concentration of lactating dairy cows in a pasture-based dairy system in Tasmania. British Society of Animal Science, Annual Conference, p191.