Megalac provides an increased energy supply which can be efficiently converted to milk and has been proven to increase milk production in many research studies over the last 30 years.

Research work in the US (Weiss and Wyatt, 2004) evaluated the response of dairy cows offered a control diet containing no supplemental fat, Megalac added at either 1.75 or 3.5% of DM, or hydrogenated triacylglycerides included at 1.6 or 3.2% of DM in a Latin square design with 28-d periods.

Results from the study are presented in Table 2. The lower level of 1.75% Megalac used in this study equates to approximately 400 g/day and is similar to typical farm feed rates. While DM intakes were similar, the cows offered Megalac produced an additional 3.5 kg milk/day and milk fat was increased by 0.13%. The higher level of Megalac supplementation resulted in a 5.6 kg/d increase in milk yield.

Research at the University of Reading in the UK evaluated the response of high-yielding Holstein-Friesian dairy cows to supplementation with Megalac through an extended period of lactation.

Cows were offered a control (non-fat supplemented diet) or the control diet supplemented with Megalac at 2.2% of dietary DM from just after calving to 17-weeks (approx. 120 d) of lactation.

As presented in Table 3, treatment had no significant effect on DM intake, live weight or condition score, but milk yield increased by an average 4.3 kg/d. The pattern of milk production is presented in Figure 3, highlighting that cows offered the Megalac diet produced numerically higher milk volume up to week seven, an effect which reached significance from weeks 7-17. 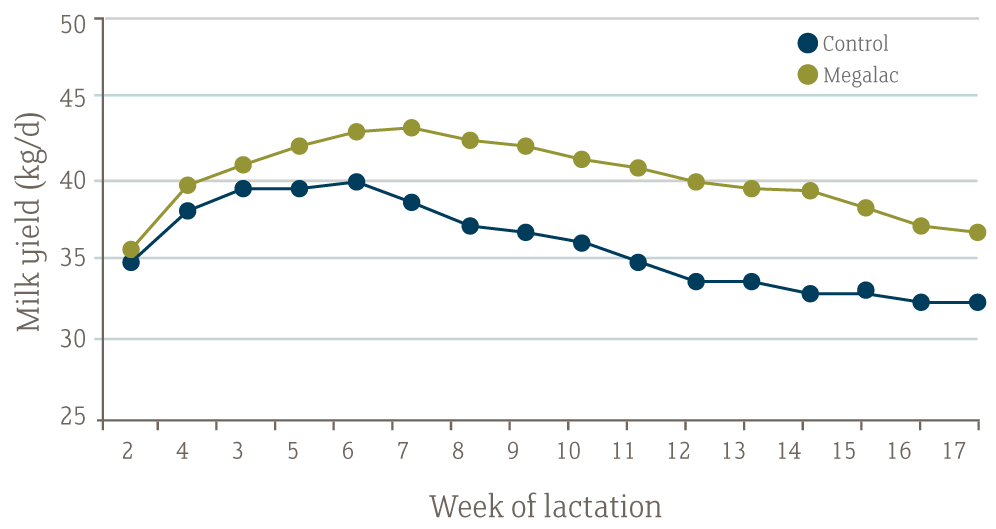