Megalac has been proven to improve fertility in a number of studies. This may reflect improved energy status of the animal by supplementing with the highly energy-dense fat supplement or to other factors not related to energy e.g. effect on egg quality or hormonal status.

Progesterone is the key hormone of pregnancy and insufficient production will result in failure to establish and maintain a pregnancy. Data from the University of Nottingham (UK) reported a linear increase in progesterone as diet fat concentration was increased from 3.5% to 5.9% of diet DM (Figure 1), achieved by increasing addition of Megalac (from 0 g/d to 660 g/d at the highest fat level). 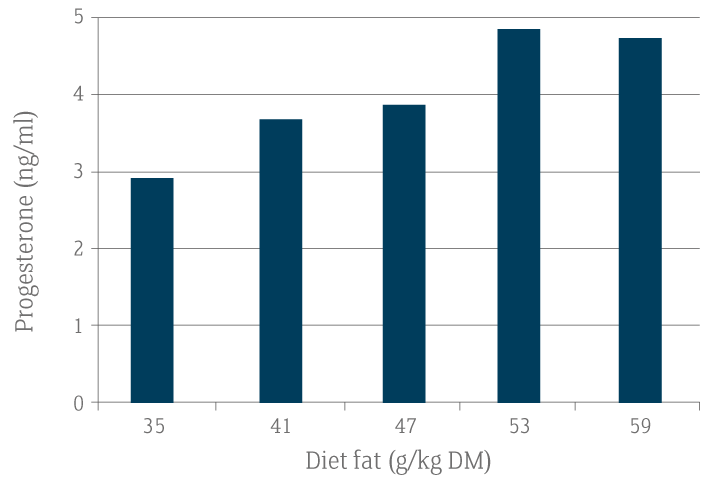 Detailed work at the University of Nottingham (UK) examined the effects of level of Megalac on developmental competence of oocytes in lactating dairy cows. Oestrous cycles were synchronized in 20 cows offered silage-based diets supplemented with Megalac at either 200 g/d or 800 g/d. A total of 1051 oocytes were collected by ultrasound guided ovum pick up (OPU) in 7 sessions/cow at 3-4 day intervals. Oocytes were matured, fertilized and cultured to the blastocyst stage in vitro. Embryo quality was assessed by differential staining of day-8 blastocysts.

Results, presented in Table 1, indicate that cows offered the higher rate of Megalac had a significantly higher rate of blastocyst production from in vitro-fertilised (IVF) oocytes and cleaved embryos. These data indicate that cows offered the higher level of Megalac produced higher quality, more viable eggs that are more likely to sustain a pregnancy. Similarly, higher total and trophectoderm cell numbers indicate better quality blastocysts that may improve their subsequent development.

Data from the USA (Table 2) have demonstrated the effect of Megalac on increasing size of the dominant follicle at ovulation. This is important, as a larger ovulating follicle results in a larger corpus luteum (the site of progesterone production) with an associated increase in circulating concentrations of progesterone – the key hormone associated with pregnancy.

Data from the UK (Davies, 1992) reported that cows offered Megalac rumen-protected fat had fewer days open than those offered a control ration, with time from calving to conception being reduced by 9.4 d (P<0.05). As well as the improved fertility measures, cows offered the Megalac-supplemented ration also produced more milk, averaging an additional 1.6 kg/d.

Research work at the University of Florida in the USA demonstrated the practical benefits of inclusion of Megalac in dairy rations.

Holstein cows were offered diets containing either 0% or 2.2% Megalac from calving until 120-d in milk, the latter corresponding to 450 g of Megalac/cow/d. As presented in Table 3, conception rates to first, and particularly to second service, were higher with the Megalac-supplemented group of cows. This improvement was carried through to pregnancy rate at the end of the study which was over 65% higher in the Megalac-supplemented group of cows compared to the control group which received no fat supplement.