A number of studies have been undertaken to evaluate the benefits of Megalac on ewe and lamb productivity. These studies have recorded improvements in ewe milk production, resulting in increased lamb growth rates due to increased energy supply, and an improved ability of ewes to rear all their lambs, particularly relevant to ewes with multiple births.

A study undertaken at the Rowett Research Institute in Scotland evaluated ewe and lamb performance following incorporation of Megalac into ewe diets. Ewes were offered control diets supplying either 22.5 or 27.0 MJ ME/d, or the control diets supplemented with either 75 or 150 g Megalac/d.

Addition of Megalac to the diet had no significant effect on milk yield or milk protein content, however both milk fat % (P<0.01) and milk fat yield (P<0.05) were increased by Megalac inclusion, an effect evident at both levels of basal ME intake (Table 1).

Hernandez et al., 1986. The effect of dietary supplements of protected fat on the yield and fat content of ewe’s milk and on lamb growth rate. British Society of Animal Production, Winter Meeting, paper no. 76.

In a further study at the Rowett, 20 ewes, following a synchronised lambing, were allocated to either a control diet supplying 22.5 MJ ME/d or the control diet supplemented with 200 g Megalac/d. Measurements continued up to weaning at 37-days during which time lambs had free access to creep feed. The effect of diet on lamb growth rate is presented in Figure 1. 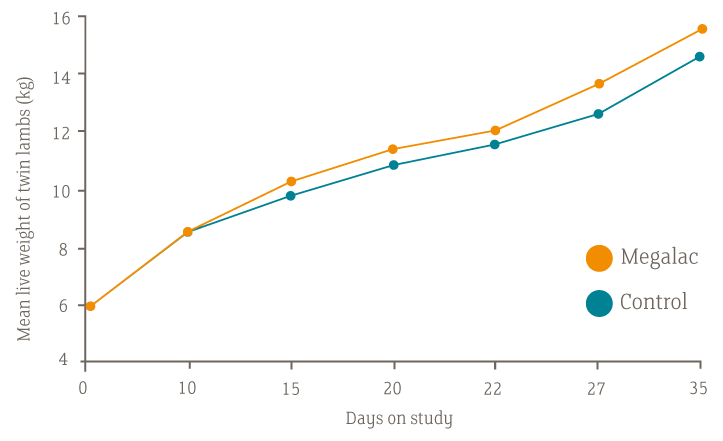 The data show that lambs suckling ewes offered Megalac had higher growth rates than those from ewes offered the control diets; mean live weight of each of the twins from Megalac-fed ewes at weaning was 1.0 kg higher than twins from control-fed ewes. Creep feed intakes over the study averaged 1.68 and 1.34 kg/lamb for the control and Megalac-supplemented groups, respectively, indicating that the improved performance of lambs from Megalac-fed ewes was due to the effects of the fat supplement. This likely reflects increased fat output in the ewes’ milk and hence increased energy supply for the lambs.

Hernandez et al., 1986. The effect of dietary supplements of protected fat on the yield and fat content of ewe’s milk and on lamb growth rate. British Society of Animal Production, Winter Meeting, paper no. 76.

Data from the Rosemaund Experimental Husbandry Farm in the UK evaluated the effects on ewe and lamb performance of supplementing diets with Megalac pre- and post-lambing. One-hundred ewes were offered a control or treatment concentrate from eight weeks pre-lambing at a rate of 0.5 kg/d initially, rising to 1.1 kg/d, and at a rate of 1.4 kg/d post-lambing to six weeks. Straw was available on an ad libitum basis and lamb creep was available from ten days to slaughter. Ewes in the treatment group were offered the control concentrate in which 10% of the barley was replaced by Megalac; ME values of the control and Megalac concentrates were 12.7 and 13.9 MJ/kg DM, respectively, during pregnancy, and 12.5 and 14.0 MJ/kg DM, respectively, during lactation.

Results showed that while there was no effect of Megalac supplementation on lamb birth weight or on weight of the ewes at lambing, ewes fed Megalac tended to be in better body condition at weaning (2.4 vs 2.0). However, considerably more ewes fed the Megalac diet reared all their lambs, an effect which was particularly evident for ewes with triplets where all the ewes reared all their lambs, compared to only 60% of ewes offered the control diet (Figure 2). 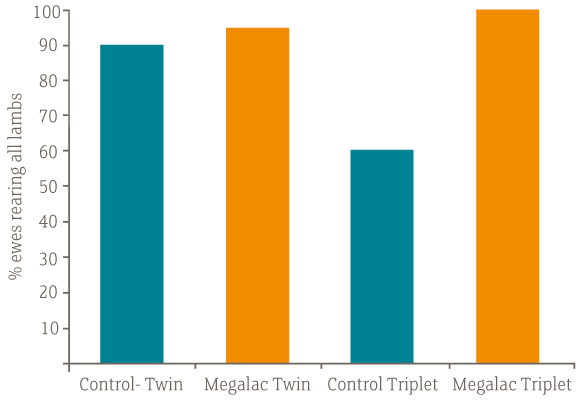 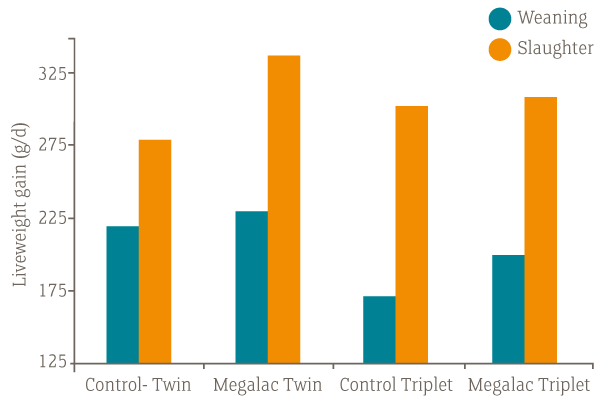