Dairying in Chile: lessons from our visit

Sometimes the best way to learn in farming is to look at what others are doing. Reason enough for our Global Technical Manager to hotfoot it to Chile, where he discovered some surprising parallels between dairy farming in Chile and the challenges we face in our domestic industry. Let’s take a look.

Ready to feel like an ant on a giant spinning ball? Chile is some 7,000 miles away from the UK. Yet despite the jaw-dropping distance, Chilean dairy farmers face many similar challenges to those we grapple with in the dairy farming industry at home. That, together with the opportunity to see the world’s largest robotic milking herd, was enough to convince our Global Technical Manager, Dr Richard Kirkland, to pack his travel bag and make the journey to Chile. Here’s what he learnt.

2.6bn litres of the white stuff: a background to dairy farming in Chile 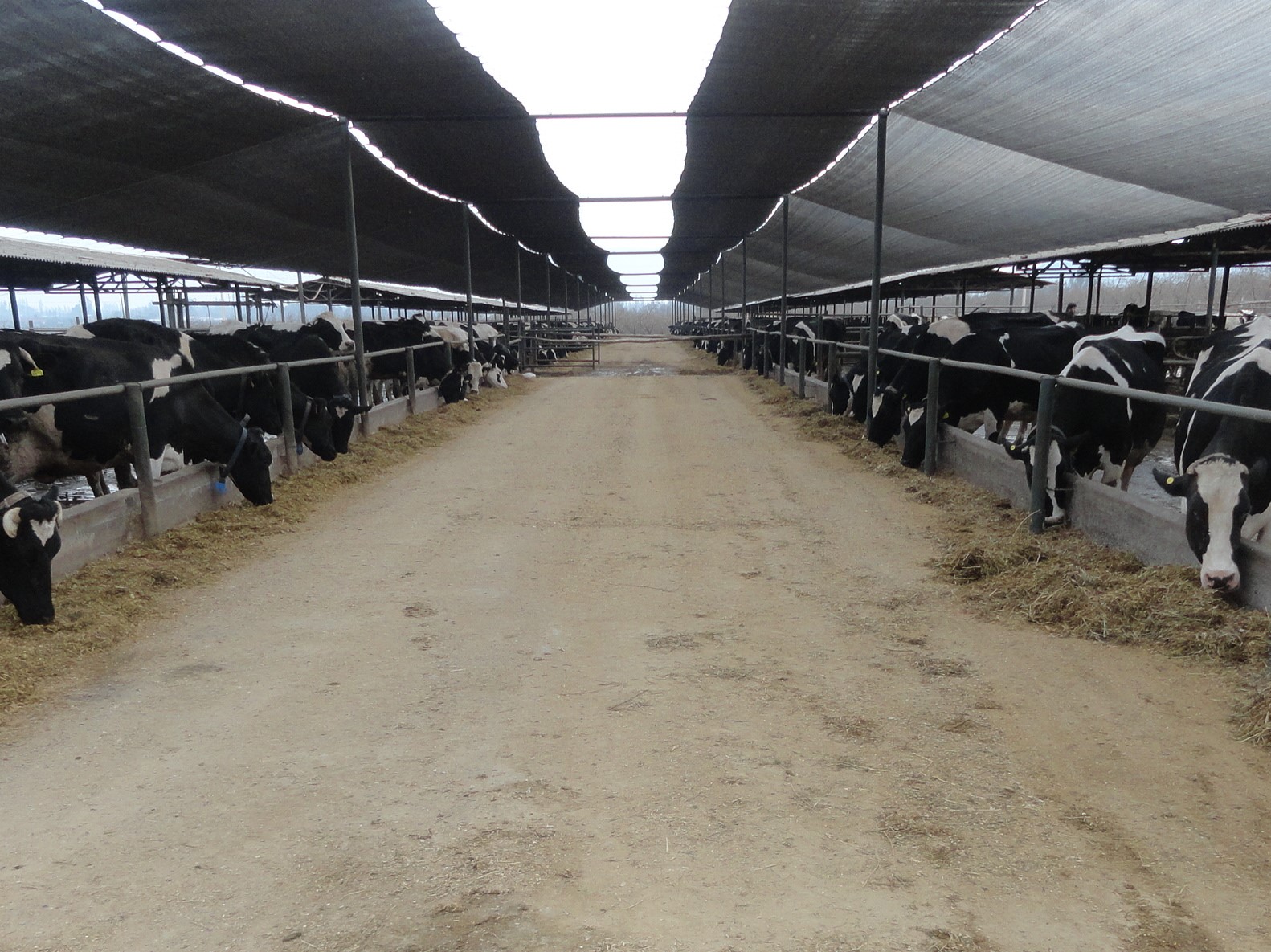 Before we look at some of the specific challenges the Chilean dairy industry is facing, Richard provides a little context on the industry as a whole.

“With half-a-million dairy cows in milk and close to 6,000 commercial farms, the dairy industry is reasonably-sized relative to the population and serves an essential purpose in supplying fresh local dairy products to a population otherwise quite cut-off from neighbouring inland countries. Total milk production at around 2.6 billion litres has changed little over the past ten years due to complex social, environmental and economic challenges.”

Corrals: popular in the north 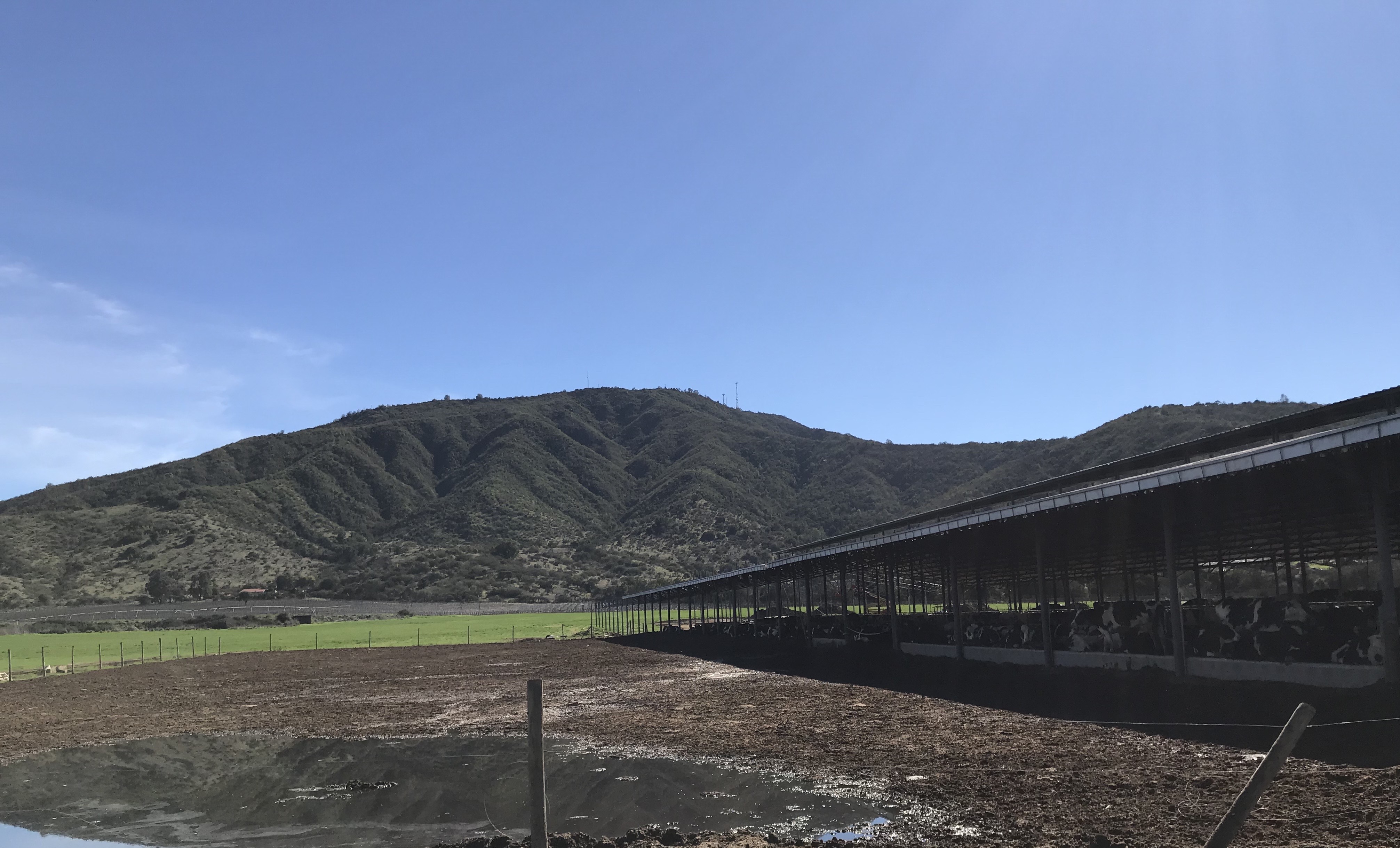 Northern Chile can be stiflingly hot, and water availability is a constant concern for dairy farmers. That predisposes the region to corral-type systems, as Richard explains.

“In the north, it’s typical to find higher-input, higher-yielding herds – primarily Holstein-Friesian – with fairly typical feed ingredients available and diets common to those of USA producers. Maize silage, alfalfa hay and ryegrass silage are common forages here. However, climatic conditions dictate that the north of the country accounts for a much lower production volume than elsewhere.” 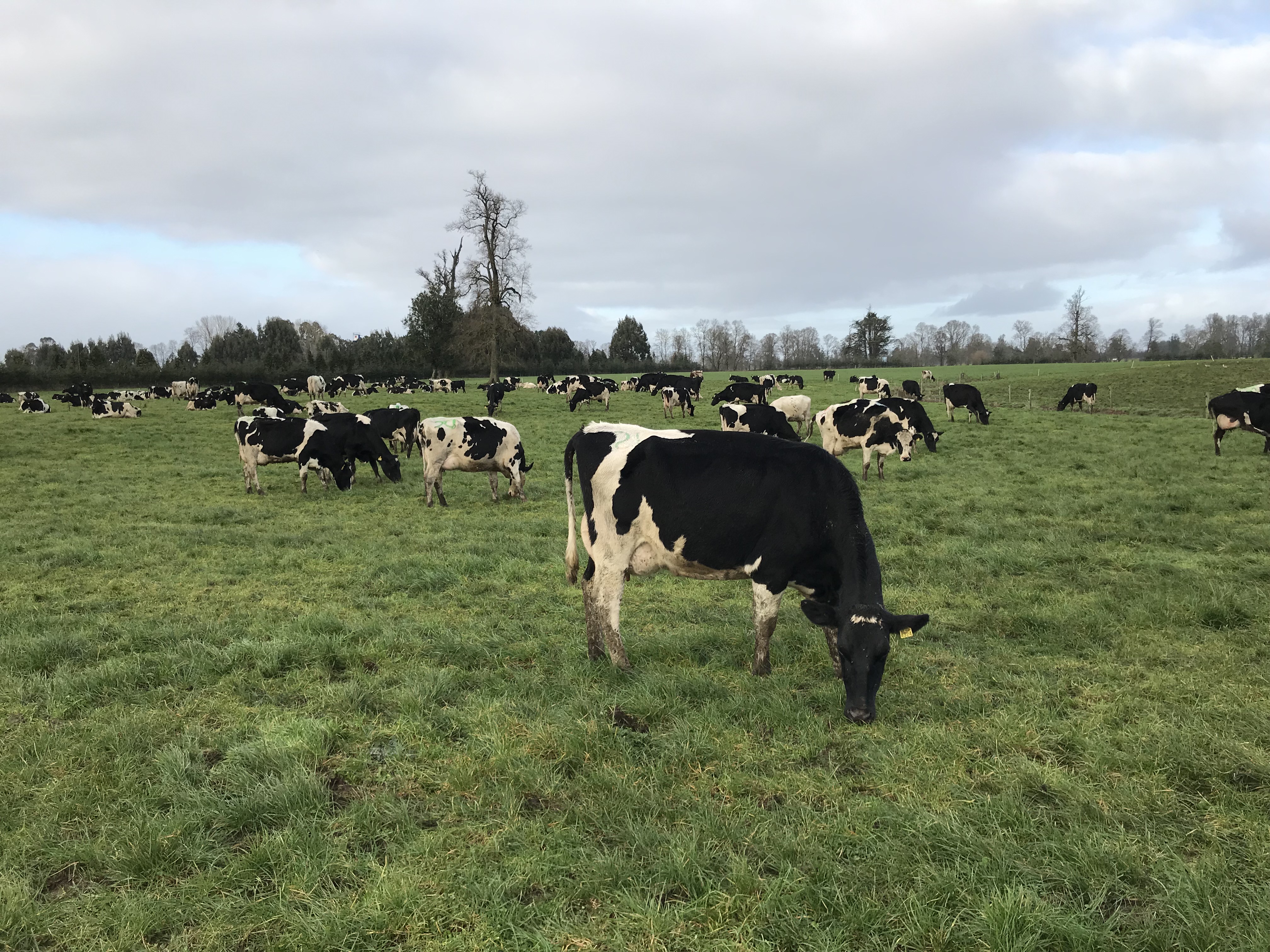 With more plentiful rainfall, dairy production becomes more abundant as you travel south, away from the more arid conditions of the north. The production here is similar to what we see in New Zealand, as Richard reveals.

“Travelling south from the capital Santiago, you encounter the bulk of Chile’s dairy industry – some 70% of milk production is centred on this region. With more-plentiful rainfall and extensive expanses of land, the Osorno region is the dairy heartland and heavily grazing-focused. Here we see a strong New Zealand-type production focus and some exceptional grazing systems producing 8-9,000 litres per lactation on tight spring-calving systems, including 30 to 40-day ‘holiday’ periods on top units. The Jersey breed and Holstein-Friesian crosses become much more common here; cows that are more-suited to extensive grazing.”

But this region is not without challenges.

It’s something of an oddity that the nutritional challenges faced by dairy farmers in the Osorno region will be familiar to dairy farmers 7,000 miles away in the UK and Ireland. But – as they say – the truth is stranger than fiction. Here’s Richard to explain.

“These seasonal grass-based production systems in Osorno suffer the same challenges as encountered in the grass-growing regions of Western Europe where the spring flush of pasture can result in severe milk fat depression. Milk fat : milk protein inversions are not uncommon. With milk payments heavily influenced by milk fat production either on a % or kg/day basis, milk composition is of major importance and advice on supplementation requires balancing to suit the changes in basal sward through the season.

“Low fibre, high sugar and elevated fat concentrations in spring grass promote classical milk fat depression resulting primarily from production of trans fatty acids in the rumen. These conditions require careful supplementation to counter this nutritional imbalance where milk fat ‘crashes’ from over 4.0% to 3.0% are reported.”

Leading the way with robotic milking 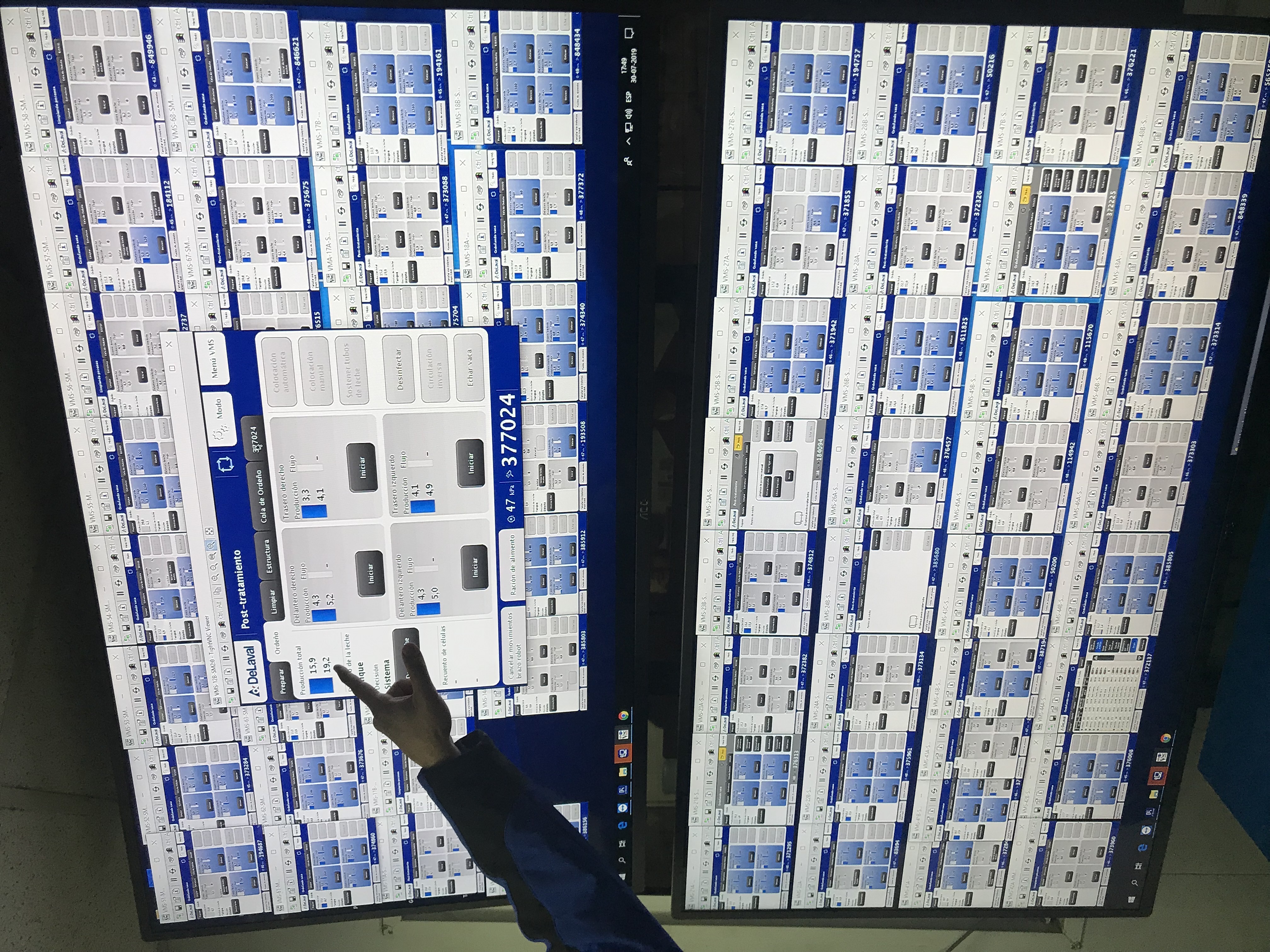 Dairy farmers across the UK and Ireland are switching on to the benefits of robotic milking. But in terms of uptake, nothing beats a particular farm in Chile, which has become a world leader in robotic milking. Richard explains.

“Aside from the extensive grazing platforms, technological developments have certainly made great strides into sections of the Chilean dairy farming industry. Of primary interest is the 4,000-cows-in-milk Ancali herd which, with 65 robots in place, is the largest robotic milking herd in the world.  This highly-impressive single-site unit of Holstein-Friesian cows yield over 14,000 litres with target milk fat of 3.9% and milk protein at 3.4%. Nutritional management of such a high-performing herd is critical and the glucogenic : lipogenic balance is especially interesting, particularly with the typically high starch levels in the ration, up on 28%.

“At this level of production, the requirements for fat are high. The farm must make sure there’s sufficient dietary fat supply to provide the steroid nucleus needed to enable progesterone production, the key hormone for pregnancy initiation and maintenance. This can be safely achieved via rumen-protected fat supplementation, which avoids the fibre-depressing effects of liquid oils or high-oil ingredients such as brewer’s grains. Individual fatty acids must be considered when targeting specific aspects of production – such as higher oleic fatty acids to aid body condition and fertility, and higher palmitic acid to push milk fat production. This ideal balance of rumen-protected fatty acids can be found in the recently-launched Mega-Max product from Volac Wilmar.”

“Milk supply in Chile is primarily destined for ‘home’ consumption with the country now a net importer of dairy products. Liquid milk, yoghurt and cheese production are the primary destinations for processed milk leading to an emphasis on milk fat production. The largest co-op, Colun, process close to 30% of national milk production, collected from their 730+ members in the southern grazing heartland with suppliers averaging 6,700 litres per cow from a grass base.

“Overall, and with some amazing scenery, it’s easy to appreciate the attraction of this part of the world. But there’s no doubt that the Chilean dairy industry faces similar pressures to those in our own local industry. While the base level of production and technology is increasing, the top few farms produce a highly disproportionate volume of total milk supply.”